The third instalment of the franchise reboot, Star Trek Beyond continues in the same vein as its predecessors. The film is a lot of fun, although not as striking as the first two films.

Two years into their five-year mission, the crew of the USS Enterprise latest mission takes them into unchartered territory. Captain James T. Kirk and his crew are stranded on a remote planet with no means of communication…

Justin Lin takes over the directing reigns from producer J.J. Abrams for Star Trek Beyond. The third instalment of the franchise has a more episodic feel than the first two. If its predecessors were setting up the world and the characters, Star Trek Beyond then runs with this. The film is an adventure, putting established characters in a dangerous and exciting situation.

Writers Simon Pegg and Doug Jung create something akin to a vast and well-executed episode of the television series. The threat is felt fairly early on, with the main characters isolated in an unknown world. The force which pushes the crew forward in Krall, an antagonist with mysterious origins. However this set up works as a vehicle to explore and further the relationships within the crew.

Star Trek Beyond throws together different members of the crew, offering further depth to their characters as they face a powerful challenge. Karl Urban’s Bones is the character that benefits most from this; the character is given more colour than in the previous instalments. Scotty’s dialogue becomes inexplicably pastiche at times, whilst Kirk and Spock further their ties. Jayla (Sofia Boutella) is a good addition to the film, whilst Idris Elba delivers a suitably wearied performance. The film works best when it is concentrating on the action. These sequences are finely executed by director Justin Lin.

Lin is kinetic with his camera movement, entering scenes at any and all angles. This will work well in 3D, although 2D also feels the benefit. Action sequences generate excitement and will satisfy those yearning for blockbuster spectacle. Michael Giacchino’s score is as fitting as ever.

Star Trek Beyond does a good job of furthering crew dynamics whilst entertaining throughout. A focus on the science fiction aspects of the franchise would probably be welcome in the next edition. Nevertheless, the action, comedy, adventure and fitting tributes work very well in this film.

Plenty to gaze upon this week, with the Ghostbusters first look image, posters for Batman v Superman: Dawn of Justice and Deadpool, and more… 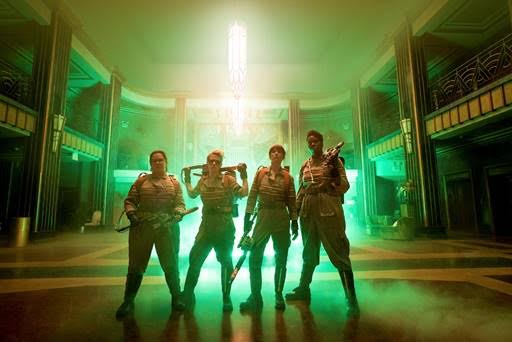 Here is the Ghostbusters first look image. Little is known about the plot of the film, but the new Ghostbusters don very similar attire to their predecessors. Directed by Paul Feig and starring Melissa McCarthy, Kristen Wiig, Leslie Jones and Kate McKinnon. Ghostbusters is set to be released in Summer 2016.

Paolo Sorrentino’s Youth is a drama about a retired composer staying at a spa. The film features an enviable cast that includes Michael Caine, Rachel Weisz, Harvey Keitel and Jane Fonda. Youth, which has already gathered awards nominations, will be released in UK cinemas on 29th January 2016.

This is my favourite of the three posters released for Batman v Superman: Dawn of Justice this week (the others were of the title characters). Gal Gadot stars as Wonder Woman in the upcoming DC film. It will be interesting to see the scope of her role in the film. particularly with the plans for the franchise. Batman v Superman: Dawn of Justice will hit the big screen in March 2015.

Fantastic Beasts and Where to Find Them Trailer

This latest Deadpool poster continues the tongue-in-cheek marketing we have seen so far. Ryan Reynolds reprises his role from X-Men Origins: Wolverine as the anti-hero Wade Wilson. Promising to be closer to the edge than have superhero fare, Deadpool bounds on to cinema screens on 4th February 2016.

The first trailer for Star Trek: Beyond was released earlier this week, overall it seems to be harking back to the original series in some places, albeit on a much grander scale. Little is revealed about the plot, but the cast including Chris Pine and Zachary Quinto are joined by Idris Elba for this instalment. Star Trek: Beyond hits Uk screens on 22nd July 2016.

Following the release of the trailer earlier this week, here is a look at a new poster for X-Men: Apocalypse. After the success of X-Men: Days of Future Past, the franchise returns with villain Apocalypse. The trailer suggests the film marries this new series of films with the older one, by looks at least. X-Men: Apocalypse is released in cinemas in May 2016.

Plenty in this week’s preview of coming attractions, including the Deadpool trailer, a video for The Martian, the latest Crimson Peak poster and more…

Here is the red band Deadpool trailer. The film deviates from other Marvel films in that it is clearly aimed at an adult audience with the violence and swearing. As such, it offers something different in the cramped superhero marketplace. Deadpool is set for release on 4th February 2016. My birthday, in case you were wondering.

The trailer for Hitman: Agent 47 certainly looks action-packed. The film is based on a games franchise, of which I know only that you have to toss a coin to distract people. Starring Rupert Friend and Zachary Quinto, Hitman: Agent 47 will hit the big screen on 27th August 2015.

This video, found in the Ares archive, reveals a bit about the main characters in Ridley Scott’s upcoming The Martian. The film is about an astronaut who gets stranded on Mars, and the efforts to rescue him. The all-star cast includes Matt Damon, Jessica Chastain and Chiwetel Ejiofor. The Martian is released in UK cinemas on 30th September 2015.

Here is the latest image from Guillermo del Toro’s latest Crimson Peak. The film is about a young woman who is swept away to an old house which is full of mystery. The gothic horror stars Mia Wasikowska, Tom Hiddleston and Jessica Chastain. Crimson Peak creeps its way onto the big screen on 16th October 2015.

The Intern stars Robert De Niro as the older intern of high-flyer Anne Hathaway. The film is the latest from writer-director Nancy Myers, and seems to have a similar style to her previous output. The Intern will be released in UK cinemas on 2nd October 2015.

Here is the teaser for comedy sequel Zoolander 2. It reveals little about the plot of the new film, but reassures that the style of comedy has not changed. Reuniting Ben Stiller, Owen Wilson and Will Ferrell, Zoolander 2 is set for release in February 2016.

Here is the trailer for Black Mass, which focuses on notorious mobster James “Whitey” Bulger. Starring Johnny Depp, Joel Edgerton and Benedict Cumberbatch, it will interesting to see how the film compares to other gangster movies. Black Mass will be released in cinemas on 13th November 2015.

Star Trek Into Darkness is a hugely enjoyable blockbuster that should satisfy the most casual viewers to the die-hard fans of the franchise.

When a rogue Starfleet agent causes mass destruction, Captain Kirk and the crew of the Enterprise are tasked with capturing him. Their mission takes them to dangerous enemy territory…

The reason that Star Trek Into Darkness works so well is that it ticks all the boxes in terms of action adventure, science fiction and comedy. Given how well received 2009’s Star Trek was, Into Darkness had rather a lot to live up to. J.J. Abrams’ sequel certainly meets expectations.

Star Trek Into Darkness is even more enjoyable than its predecessor.  Star Trek was very entertaining, so this signals the calibre of this sequel. This is mostly due to the fact that the origins tale has already been covered; Into Darkness can jump straight into the action. There is of course character and relationship development in the film. However,  the narrative feels more enticing in this instalment.

Pacing in the film is solid; there is never really a dip in momentum despite the two-hour plus run time. There are a few moments in the film that are a bit predictable, but Into Darkness is so well executed that it is hard to mind these.

There are numerous nods to earlier Star Trek films; no doubt these will be appreciated by fans. Michael Giacchino’s score definitely gives Into Darkness that epic blockbuster feel. In 3D, some of the foreground appears blurry, particularly near the beginning of the film. There is also a shot that seems so overly gratuitous it almost seems as if the filmmakers kept it in to make viewers roll their eyes. Nonetheless, these are only minor blemishes in what is a superb blockbuster.

Performances are strong throughout Into Darkness. Chris Pine and Zachary Quinto display good chemistry in their turbulent friendship, while Benedict Cumberbatch is fantastic as the rogue agent.

Star Trek Into Darkness is simply great fun, and currently the blockbuster to beat this summer.

Robert De Niro heads an all star cast in comedy The Big Wedding. I wish Robert De Niro was still making films with Martin Scorsese, but there you go. The film also stars Susan Sarandon, Diane Keaton, and Katherine Heigl, who surely cemented this role in her pact with the devil. The Big Wedding is released in UK cinemas on 29th May 2013.

Above is a featurette on upcoming movie Oblivion. Starring Tom Cruise, Olga Kurylenko and Melissa Leo, Oblivion is a future-set science fiction film from the director of Tron: Legacy. Oblivion is out in cinemas on 10th April 2013.

Brad Pitt stars in apocalyptic extravaganza World War Z. Based on the novel by Max Brooks, Pitt stars as Gerry Lane, a UN employee trying to ascertain the cause of a pandemic which is threatening the world. World War Z is released in UK cinemas on 21st June 2013.

Gru is back! But perhaps more importantly, Agnes is back! From the above trailer, Despicable Me 2 appears to have a sound plot. It also features a host of talent, including Steve Carell, Al Pacino, Kristen Wiig and Steve Coogan. Despicable Me 2 is due for release on 28th June 2013.