Here is this week’s what to watch on Shudder, which features Cube, The Hills Have Eyes, and short The Banishing…

What to Watch on Shudder: Cube

Vincenzo Natali’s 1997 film Cube is quite the thriller. The film is about a group of strangers who wake up in a cubed structure, each of which are unsure how or why they are there. The film features enough mystery, tension, and gore to please most viewers. Reportedly inspired by an episode of The Twilight Zone, Natali’s film is inventive and occasionally wince-inducing. There are aspects of Cube itself which could be considered an inspiration on later horror movies, including Saw. Cube is a great feature debut from director Natali, who went on to make Splice and direct episodes of Westworld and Hannibal.

What to Watch on Shudder: The Hills Have Eyes 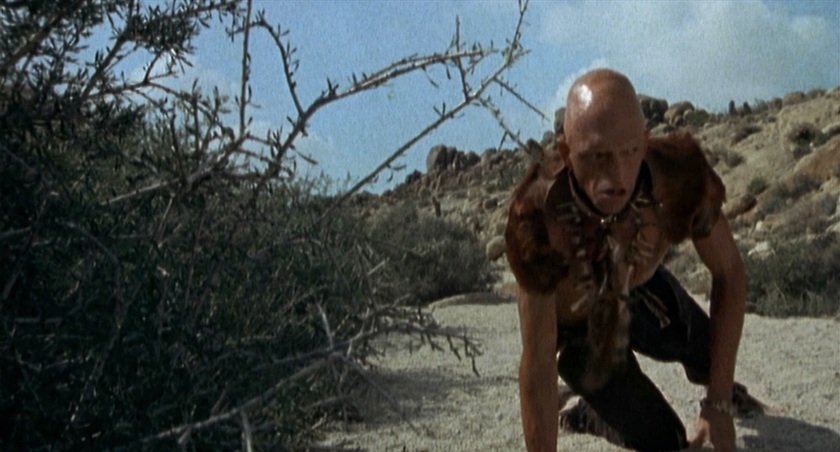 The late, great Wes Craven’s sophomore picture The Hills Have Eyes still packs a punch forty years later. The 1977 film is about a family who are targeted by savages after being stranded in the Nevada desert. The film has the requisite tension and striking scenes that we have come to expect from Craven. The Hills Have Eyes features performances by Dee Wallace and Michael Berryman, in an early, but memorable role. The film was remade in 2006, but it is this original that has become a cult classic.

What to Watch on Shudder: The Banishing

Director Erlingur Thoroddsen’s twelve-minute short The Banishing is a great watch. The film is about a teenager who tries to protect her younger sister from the spirit that haunts her. Thoroddsen’s film delivers a haunting atmosphere that rachets up fear. This is aided by a memorable score. The story is well executed, and the ending is a great way to bow out. It is easy to see why The Banishing won awards.

Wes Craven’s The People Under The Stairs is something of a amalgamation of a horror and a children’s adventure.

With his family about to be evicted by ruthless landlords, young Fool is desperate to save their home. He reluctantly agrees to aid two robbers who plan to rob the landlords’ house, but the three are unaware what lies in wait…

The People Under the Stairs is less traditional horror and more of an adventure. The film has moments of real tension, and there are creepy overtones than run throughout. However, the film does not concentrate solely on trying to scare viewers.

There is a vein of social conscience that runs throughout Wes Craven’s 1991 film. The film pits an impoverished black family against wealthy white landlords who are unconcerned with their tenants’ plight. The People Under the Stairs is much a product of the period that produced it. That is not to say that these social concerns have been completely eradicated, but merely that it seems like a story of the late 1980s/early 1990s. The film is not just about good triumphing over evil, but a sense of justice being delivered.

The People Under the Stairs reveals more about its antagonists as the film progresses. There is enough offered initially to keep viewers engaged. The story behind the house owners is far-fetched, yet not completely implausible. It is this which makes the antagonists most unsettling. There is a cruelty to them which is disturbing. In the final quarter of the film, rationality is eschewed in favour of an all-out rescue mission.

Performances in The People Under the Stairs are good overall. Brandon Quintin Adams is amiable as Fool, while A.J. Langer looks the part as Alice. Wendy Robie brings a decent amount of menace to her role.

Whilst it is dated in parts, The People Under the Stairs is a good horror hybrid that entertains throughout.

The People Under the Stairs is available on Blu-Ray and DVD from 4th November 2013.

Another month, another belated sequel to a popular franchise. Thankfully Scream 4 is one of the better of these types of film; it works well as a sequel as well as a stand-alone movie.

Ten years after the Woodsboro massacre, Sidney Prescott returns to the small town to promote her book. Her arrival coincides with the murders of two high school students, not unlike the ones that had taken place previously and replicated in the Stab movies. It seems the killer is back, and after Sidney and her friends once again…

Scream 4 is an enjoyable episode in the horror series. Fans of the franchise should be pleased with this most recent installment. There is a period midway through the film when momentum starts to wane, but the film recovers before too long. The film certainly works more so than Scream 3. Although there are ridiculous incidents in this movie, it flows better than its predecessor.

Scream and its successors were never the scariest of horror films. Scream 4 follows suit; there are a few jumpy moments, but the film could never be classified as terrifying. Instead, the film relies on humour and mystery to maintain audience interest. Given that it is the fourth film in the series, it is not made clear which of the original cast members will survive, if any. Furthermore, the identity of Ghostface remains a mystery, with director Wes Craven offering a number of likely suspects.

Scream 4 works so well because it never forgets that it is a belated sequel. Like the other films in the series, it plays with horror conventions, never missing an opportunity to reference them. Writer Kevin Williamson litters the film with mentions of genre films, updating to make light of the plethora of horror remakes that have been produced in the intervening period between the last Scream movie. The opening sequence is exemplary, depicting just how self-reflexive the series has become. Characters in the film discuss how meta events are; taking the joke to the nth degree.

Performances are good all round, with Neve Campbell, Courtney Cox and David Arquette reprising their familiar roles. Emma Roberts is convincing as Jill, but Hayden Panettiere is less believable as best friend Kirby. Rory Culkin is well cast in the Randy-esque role of Charlie.

Although the deaths are not particularly imaginative, the humour and self-reference sufficiently entertain. Scream 4 is a well-constructed and enjoyable movie, given that it is the fourth in a series.

Wes Craven’s My Soul to Take displays flickers of the director’s flair for horror, but ultimately pales in comparison to his best work. The film attempts to trade on trepidation instead of gore, to varying degrees of success.

A serial killer dubbed the ‘Riverton Ripper’ has been terrorising a small town in America. The murderer is apprehended, but the ambulance crashes on its way to the hospital and his body is never recovered. Sixteen years later, teenagers gather to celebrate the anniversary, and the birthday of seven of their classmates. Born on the same day as the Riverton Ripper, the teenagers soon discover that someone is after them…

My Soul to Take is a sleek horror film that should tick all the boxes of the slasher genre. There are two main problems that hinder the overall enjoyment of the film, however. Firstly, the convoluted ending really lets down My Soul to Take. While far-fetched twists and eyebrow-raising revelations are commonplace in the genre, the ridiculous ending thwarts the sense of mystery that had hitherto been building up. The film is set up with a number of avenues as options for the finale. It is unfortunate that Craven decided on the trite ending when the film could have gone in a different direction.

The second main issue with My Soul to Take is that there is not enough tension, considering it is a horror film. There are some effective sequences, but these are not sufficient to sustain the entire movie. Wes Craven’s name is supposedly synonymous with horror suspense, yet his ability to generate fear is somewhat absent here. Notwithstanding, My Soul to Take is better than a significant number of horror films released in the last few years. There is genuine mystery in the film; the audience is kept guessing as to the identity of the Ripper, as well as if he is real or a figment of the imagination. And despite the incredulity of the conclusion, at least it is not predictable.

Production values are good in My Soul to Take. The look of the Ripper does look a bit like a standard Halloween costume, but perhaps this is intentional. Rather unusual for this brand of horror, the performances are fairly decent. It helps that many of the characters are given a little depth, rather than simply being lambs to the inevitable slaughter. Max Thieriot is suitably troubled as protagonist Bug, while Emily Meade as the necessary attitude as requisite bad girl Fang.

My Soul to Take is not a bad addition to the slasher genre, but neither is it a sterling one. The premise is perfectly fine; however the execution could have done with some improvement.

Competition: Win My Soul to Take on DVD!

To celebrate the release of Wes Craven’s My Soul to Take, I Heart The Talkies has 5 copies of the DVD to give away.

The film tells terrifying tale of the Riverton Ripper, who legend has it, swore he would return to murder the seven children born on the night he died.  Now, 16 years later, people are disappearing again.  Has the psychopath come back to take his revenge?  Did he survive the night he was left for dead?  Or has he been reincarnated as one of the seven teens?

DVD and Blu-Ray extras include:

My Soul To Take will be released on DVD and Blu-Ray on 4th April 2011 in the UK. (c) 2010 Universal Studios and Relativity Jackson, LLC. All Rights Reserved.

To be in with a chance of winning, answer the following question:

Which one of these films was NOT directed by Wes Craven?

A. A Nightmare on Elm Street

To enter, send an email to contact@iheartthetalkies.com with the answer, your name and full postal address by 30th April 2011. Please put ‘My Soul to Take’ as the subject title.

1. Open to UK residents only.

2. Competition closes at 23.59 on 3oth April 2011. Entries received after this time will not be counted.

3. Winners will be selected at random. Successful entrants will be contacted via email by 7th May 2011. If you do not here from I Heart The Talkies by this time, please assume you have not been successful.