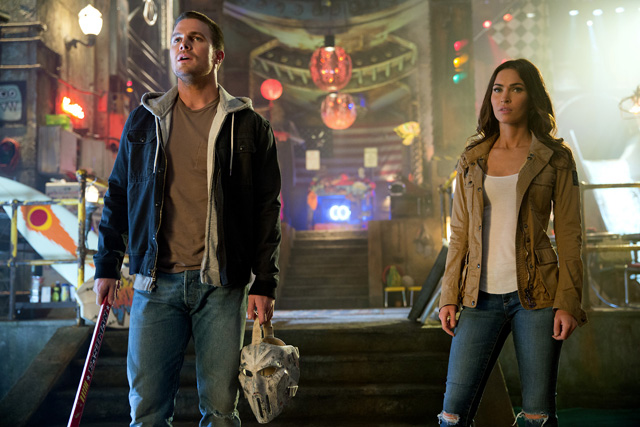 Sequel Teenage Mutant Ninja Turtles: Out of the Shadows offers more of the same. Director Dave Green’s blockbuster is aimed at a juvenile audience; fans of the first film should be satisfied by this instalment.

A year after the Turtles’ defeat of Shredder, they cannot claim credit for their actions. When a new threat emerges in New York, the Turtles must team up with April O’Neil again to uncover the villains…

Teenage Mutant Ninja Turtles: Out of the Shadows is made for a young audience. The film is teeming with CGI, silly dialogue, and formulaic plotting. As such, adults who accompany children to this film may find their minds wondering. Young children, however, should find the film’s vividness engaging enough.

Director Dave Green begins the film with an impressive opening shot. Indeed, there is some bold imagery of Manhattan in Teenage Mutant Ninja Turtles: Out of the Shadows. However, this does not make up for the lack of depth and decent narrative. The plot is wholly predictable. There is never a real sense of peril for either the Turtles or their companions. The narrative functions to introduce Krang, the main villain of the cartoon series. Yet, this antagonist features briefly during the course of the film, and does not have the presence to be considered a serious threat. Whilst it may be that focusing on human antagonists is an easier feat, the fear is that there could be several more films in this franchise.

The heroes are as one-dimensional as in predecessor Teenage Mutant Ninja Turtles. There are some nice touches in the film, such as the subtle reference to the earlier series of films in a bar scene. However, producer Michael Bay’s presence is felt in April’s (Megan Fox) opening sequence. It is incredibly tired in its voyeurism; a scene that may have been passable in the 1990s but feels awfully dated now. The hijack sequence on the highway is well executed, but this is not enough the carry the film.

Teenage Mutant Ninja Turtles: Out of the Shadows is a CGI-laden blockbuster which will not appeal to the vast majority of adult viewers. Nevertheless, less sophisticated viewers may give the film a free pass.

Lots in this week’s preview of coming attractions, including a X-Men: Apocalypse clip, Our Kind of Traitor, The Nice Guys and more…

Here is the latest X-Men: Apocalypse clip. Jennifer Lawrence’s Mystique watches Ben Hardy’s Angel take on Kodi Smitt-McPhee’s Nightcrawler in a cage fight. It is unclear where this fits in with the plot, but the 1980s setting looks fun. X-Men: Apocalypse is out in UK cinemas on 18th May 2016.

Our Kind of Traitor Featurette

The cast of Our Kind of Traitor discuss their roles in the film in this short featurette. Directed by Susanna White, the film is based on John Le Carré’s novel of the same name. Starring Ewan McGregor, Stellan Skarsgård, Naomie Harris, and Damian Lewis, Our Kind of Traitor is released on UK screens on 13th May 2016.

Here is one of the new poster’s for Shane Black’s The Nice Guys. The film is set in the 1970s and revolves around a hired enforcer (Russell Crowe) and a private investigator (Ryan Gosling) teaming up to solve a case. Also starring Kim Basinger, The Nice Guys hits the big screen on 3rd June 2016.

The Neon Demon has a UK release date. Nicholas Winding Refn’s latest film will hit cinemas on 8th July 2016. The Neon Demon stars Elle Fanning as an aspiring model who moves to LA. Her youth is noted by a group beauty-obsessed women, desperate for what she has. The Neon Demon also stars Jena Malone, Keanu Reeves and Christina Hendricks.

Here is the trailer for upcoming thriller The Shallows. The film stars Blake Lively as a young woman who takes a surfing trip to a deserted beach. Only metres from shore, she is obstructed by a great white shark. The Shallows is scheduled for release in cinema in August 2016.

An abundance of film trailers this week, including The Legend of Tarzan trailer, Teenage Mutant Ninja Turtles: Out of the Shadows and more…

The Legend of Tarzan Trailer

The Legend of Tarzan trailer is here. Boasting a cast that includes Alexander Skarsgård, Margot Robie, Samuel L. Jackson and Christoph Waltz, the film focuses on Tarzan later in life when he asked to be a trade emissary and travel to the Congo. The Legend of Tarzan bombards its way to cinema screens on 18th July 2016.

Jane Got A Gun Trailer

Here is the trailer for Western Jane Got a Gun. The film stars Natalie Portman as a mother living on a ranch in New Mexico when her family is threatened by a gang of outlaws. Also starring Joel Edgerton and Ewan McGregor, Jane Got A Gun is set for release in Spring 2016.

The BFG was never my favourite Roald Dahl book (after all, it didn’t revolve round a chocolate factory), but this new film adaptation looks to be a spectacle. Steven Spielberg directs the live-action film, with a cast that includes Mark Rylance, Rebecca Hall and Bill Hader. The BFG stomps its way onto screens on 22nd July 2016.

The full-length trailer for Batman v Superman: Dawn of Justice reveals quite a bit about the upcoming superhero movie. We get to see Clark Kent meeting Bruce Wayne, even if it may take some time getting used to seeing Ben Affleck in this role. There is also more of Jesse Eisenberg’s Lex Luthor and an appearance from another of the Justice League. Zack Snyder’s Batman v Superman: Dawn of Justice is released in cinemas in March 2016.

The Nice Guys sees the unlikely pairing of muscle for hire Russell Crowe and private eye Ryan Gosling team up to track down a missing girl. The film’s 1970s setting is instantly recognisable, from the costumes to the soundtrack. Also starring Kim Basinger and Matt Bomer, The Nice Guys will hit the big screen on 3rd June 2016.