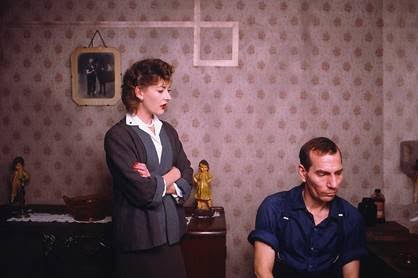 A family growing up in 1940s and 1950s Liverpool go through the spectrum of human experience. Distant Voices concentrates on the father and his impact on the family, whilst Still Lives focuses on the children…

Terence Davies’ feature debut is just as striking thirty years after its initial release. Written and directed by Davies, Distant Voices, Still Lives is an autobiographical take on the filmmaker’s upbringing in Liverpool. The story is told in a fragmented fashion, with frequent flashbacks to fill in detail and narrative.

As the film progresses, a few themes come to the fore. Firstly, the importance of the matriarch role is emphasised. Despite a difficult relationship, it is the mother who holds the family together. Secondly, the impact of the father’s behaviour casts a long shadow, even when he is no longer present.

Music plays a critical role in the lives of the family, and provides an atmospheric soundtrack to the narrative. Distant Voices, Still Lives could almost be considered a musical, thanks to the frequent singing and presence of song. In addition to this, pop culture is integral to painting the film’s period setting. Davies exhibits great attention to detail in regards to this; the film feels very much of the World War II/post-war era thanks to the sets, costumes and styling.

Distant Voices, Still Lives features great performances from its cast. Pete Postlewaite is most memorable in one of his first major roles. Freda Dowie delivers a strong performance as the family matriarch, whilst Angela Walsh is sympathetic as Eileen.

Davies illustrates the importance of memory, and the impact of early experiences on later life. Distant Voices, Still Lives is a striking and engaging drama, and testament to the filmmaker’s skill.

Distant Voices, Still Lives will be released at the BFI Southbank and at cinemas nationwide from 31st August 2018. For more information see here.