Plenty in this week’s preview of coming attractions, including a brand new The Happytime Murders clip, Climax, Widows, and more…

Here is the latest The Happytime Murders clip. Directed by Brian Henson, the film stars Melissa McCarthy, Maya Rudolph, and a host of puppets. Set in a world where humans co-exist with puppets, the film is about a private investigator who reunites with his ex-partner to find a serial killer. The Happytime Murders will hit UK screens on 27th August 2018.

Above is the trailer for Gaspar Noé’s Climax. The film is about a dance troupe’s party that goes awry. Not has assembled a cast of non-actors and professional dancers for the film. After debuting at Cannes earlier this year, Climax will close FrightFest on 27th August, and will be released in UK cinemas on 21st September 2018.

Here is the new poster for Mike Leigh’s Peterloo. The film is a portrayal of the events surrounding the 1819 Peterloo Massacre. The film’s cast includes Rory Kinnear and Maxine Peake. Peterloo will have its premiere at this year’s BFI London Film Festival, taking place in Manchester (the first time a film has debuted outside the capital at the festival). It will be released at cinemas across the UK on 2nd November 2018.

Widows is the new film from Steve McQueen. With a screenplay written by McQueen and Gillian Flynn, the film is about four women who have a debt left behind from their criminal husbands. Widows offers an enviable cast which includes Viola Davis, Michelle Rodriguez, and Daniel Kaluuya. Widows will open the BFI London Film Festival on 10th October, and will hit screens across the UK on 6th November 2018.

Here is a clip from the upcoming Crazy Rich Asians. The comedy is directed by John M. Chu, and stars Constance Wu, Michelle Yeoh, and Ken Jeong. The film is about a New Yorker who travels with her boyfriend to his best friend’s wedding in Singapore. Although it is already out in America. Crazy Rich Asians does not reach UK screens until 14th September 2018.

Plenty in this week’s preview of coming attractions, which include the brand new Halloween poster, Hereditary, The Happy Prince, and more…

Here is the new poster for the upcoming Halloween. Forty years since the original Halloween film, and twenty since Jamie Lee Curtis reprised her famous role in Halloween H20, Michael Myers is back once more. Curtis is joined by Judy Greer and Will Patton, and the film is directed by David Gordon Green (Your Highness, Stronger). With John Carpenter among the Executive Producer, Halloween hits the big screen on 19th October 2018.

Above is the new trailer for Hereditary. The upcoming horror is about a family who reveal something sinister about their ancestry when the matriarch of the clan passes away. Hereditary stars Toni Collette and Gabriel Byrne, and is the feature debut from writer-director Ari Aster. The film is set for release on 15th June 2018.

The Happy Prince is written, directed, and stars Rupert Everett. The film is his directorial debut. Everett stars as Oscar Wilde, portraying the writer in his final years. The film also stars Colin Firth and Emily Watson. The Happy Prince will be released in UK cinemas on 15th June 2018.

Life of the Party Trailer

Here is the latest trailer for Life of the Party. The comedy stars Melissa McCarthy as a newly divorced mum who decides to go back to college. The film is directed by McCarthy’s husband Ben Falcone, and penned by the couple. Also starring Gillian Jacobs and Maya Rudolph, Life of the Party will be released in UK cinemas on 11th May 2018. 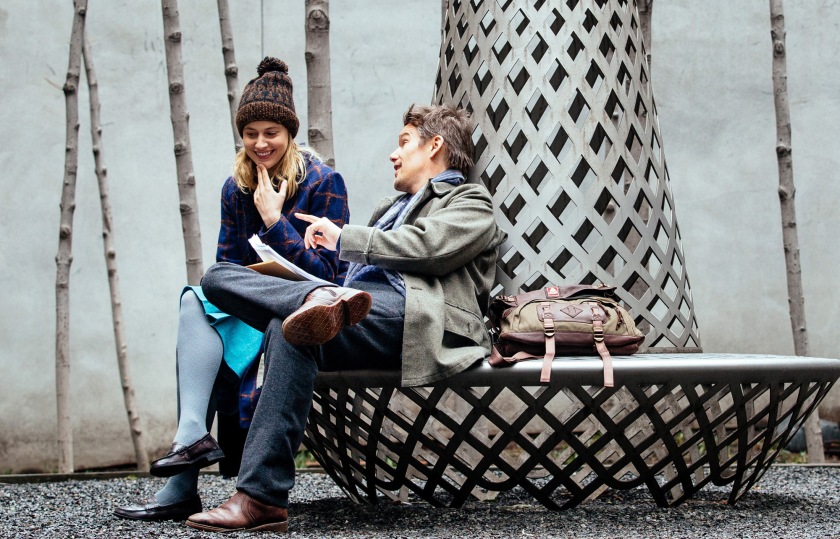 Rebecca Miller’s Maggie’s Plan owes a debt to the New York romantic comedy. The twee infusions may be off-putting to some, but those who get onboard will find the film entertaining.

Maggie has a plan. She has worked out all the details of her plan to have a baby solo. A chance meeting with a colleague disrupts her careful planning. Whilst John is entrancing to Maggie, he is also married…

Writer-director Rebecca Miller delivers a brand of escapist cinema which has allusions of Woody Allen. Maggie’s Plan is heavy on the dialogue, some of which exudes the level of self-involvement of the characters. The film is removed in a sense. The world of academia that is comfortable to the point of affluent will be alien to many. Yet Maggie’s Plan offers characters which are interesting. Their dilemmas may be inconsequential, but the film is divertingly entertaining.

Miller’s film launches straight into the motivation of protagonist Maggie. Viewers are at once advised on the motivation of the title character and the minutiae of her plan. The character is well written; she knows what she wants and her flaws are convincing. The world inhabited by the characters is one of middle-class comfort. The academic angle is interesting; references to this, and to cultural anthropology are ripe for laughs. The lifestyles of the characters are enviable and New York is depicted in a romantic fashion.

Greta Gerwig delivers a convincing performance as Maggie. She is ably helped by Ethan Hawke, who also gives a believable performance. Julianne Moore has fun with her delivery, whilst Maya Rudolph and Bill Hader are relegated to supporting roles.

The coy twist at the end of the film can be spotted a mile away. Nevertheless, Maggie’s Plan works in a modern screwball fashion. Rebecca Miller creates enjoyment from what could have been a grating set up.

The trailer for Bridesmaids suggests that it is a female version of The Hangover. Instead, the film is a less raucous comedy with moments of genuine poignancy. Nevertheless, it is still very funny and immensely entertaining.

Annie is asked to be maid of honour at her long-time best friend’s wedding. Lillian’s other bridesmaids are an unconventional bunch that includes the very wealthy and immaculately presented Helen. As Annie tries to organise the various rituals, her personal life is unravelling at an alarming rate. This contrast becomes all too stark between Annie’s life and those of Lillian and Helen…

Bridesmaids is a great comedy which also displays genuine emotion. The humour is sometimes crass, but hits the right note more often than not. Paul Feig’s film does not always go for the lowest common denominator in terms of comedy, although there is some very literal toilet humour. On the other hand, the more serious moments of Bridesmaids also work well. Annie’s plight is completely identifiable, even if her actions sometimes are not. The chemistry between cast members is evident, which is an enormous help in generating the film’s more emotional moments.

Part of the reason Bridesmaids is so effective is that aspects of the film are very realistic. The jealousy that Annie projects towards Helen and Lillian is perfectly understandable, given the state of her private life. Moreover, her dalliances with Ted are also believable, despite his dubious personality. It appears that humour is the only unbelievable part of film; situations are exaggerated to generate many of the film’s laughs.

There are only two really problems with Bridesmaids. Firstly, the film is too long. It starts off brilliantly, but wanes after about an hour. Annie’s decline is drawn out, and seems to last too long given that the film is marketed as a comedy. Secondly, two of the bridesmaids inexplicably vanish in the second half of the film. It appears to begin with that Rita and Becca are important members of the supporting cast (and vital to bringing humour), but they are nowhere to be seen later in the film. Sufficient time donated to the marital woes of both Rita and Becca, yet these strands are completely omitted in the latter part of the film without any kind of resolution. Their absence is even more unusual given the recurrence of Matt Lucas’ character, who serves little purpose.

Kristen Wiig is excellent as protagonist Annie. She is attractive but not unrealistic, and is adept at both comedy and drama. Maya Rudolph appears very natural as bride Lillian, while Rose Byrne once again demonstrates her great comedic skills.

Bridesmaids is a genuinely enjoyable film. Although there are a few flaws, it is good to see an almost all-female cast star in a film that both sexes should find entertaining.