Director Michael Dougherty’s Godzilla: King of the Monsters is something of a po-faced monster movie. The emphasis on the human characters weighs the film down.

It has been five years since Godzilla attacked, and the monster has not been seen since. Agency Monarch has to fight against a series of monsters, as the monsters battle each other…

Director and co-writer Michael Dougherty (with co-writers Zach Shields) brings the monsters together with Godzilla: King of the Monsters, a follow up to 2014’s Godzilla. The opening ten minutes is an exciting introduction to the film, succinctly introducing the narrative set up. After this, the film settles into a standard pattern for an action blockbuster, with several scenes there to provide exposition on the monsters and current state of affairs, interspersed with big action set pieces.

There are a few good thrills, where Dougherty plays up horror aspect of the monster movie. The additional monsters are introduced quite quickly; it feels like a rush to pit the monsters against each other. Viewers do not get to have a full appreciation of these new monsters.

The script is rather lacklustre. The dialogue is exposition heavy, and lacks any particular character. The explanation of Dr Russell’s actions, which occurs about a third of the way through the film, is bizarre in its need to illustrate the rather basic things she mentions with images. The film does not really earn its moments of gravitas, as the characters are not fleshed out in any meaningful way. The frequent cuts to the human activity during the big fight sequences exposes Godzilla: King of the Monsters‘ flaws.

The moving camera does help to infuse the film with a sense of urgency. The CGI effects are not particularly seamless. In some of the scenes, there is simply a whirlwind of CGI and bright lights, which is not particularly exciting to watch. The real star of the film is the sound. The sound effects for the monsters, in particular, are most impressive. The film boasts a good cast including Ken Watanabe, Vera Farmiga, and Kyle Chandler. The script does not give them much to work with unfortunately.

Given the high-concept premise, Godzilla: King of the Monsters should have been a lot more fun.

The new Creed II trailer was released today. The sequel to the very successful Creed, the film sees Michael B. Jordan, Sylvester Stallone, and Tessa Thompson returning. They are joined by Dolph Lundgren, who reprises his role as the iconic Ivan Drago. Steven Caple Jr. takes over director duties from Ryan Coogler, who stays on as an executive producer. Creed II will hit UK cinemas on 30th November 2018.

We are finally getting a look at the upcoming X-Men: Dark Phoenix. The film reunites the X-Men: Days of Future Past cast, including Sophie Turner, Michael Fassbender, James McAvoy, and Jennifer Lawrence. The cast also includes the new addition of Jessica Chastain. The film is the directorial debut of Simon Kinberg, writer of the previous two X-Men films. X-Men: Dark Phoenix will be be released in cinemas next year.

Above is a featurette on Damien Chapelle’s latest, First Man. Chazelle reunites with his La La Land lead actor Ryan Gosling in this story of NASA’s mission to land a man on the moon. The film also stars Claire Foy, Jason Clarke, and Kyle Chandler. Written by Josh Singer, First Man launches on to UK screens on 12th October 2018.

Fantastic Beasts: The Crimes of the Grindelwald Trailer

Lots of cinematic wonder in this week’s preview of coming attractions, including the new Game Night trailer, The Post, Sherlock Gnomes, and more…

Here is the new Game Night trailer. The film is about a group of friends who get together for a game night which becomes a murder mystery party. The film stars Rachel McAdams, Jason Bateman, and Kyle Chandler. Game Night is scheduled for release in cinemas on 4th May 2018.

The trailer for The Post exudes quality. The film features a stellar cast and crew, and focuses on team behind the The Washington Post taking a stand for free speech during the Nixon administration. Directed by Steven Spielberg, the film is written by Josh Singer and stars Meryl Streep, Tom Hanks, Bob Odenkirk, and Sarah Paulson. The Post is released in UK cinemas on 19th January 2018.

Here is one of the new posters for the upcoming The Greatest Showman. The musical is all about the spectacle, focusing on the ambition of P.T. Barnum. Hugh Jackman heads the cast, and is joined by Michelle Williams, Zac Efron, and Zendaya. Featuring music from the Oscar-winning Pasek and Paul (La La Land), The Greatest Showman hits UK screens on 1st January 2018.

Sherlock Gnomes is a follow-up to 2011’s Gnomeo and Juliet. The film sees the couple arrive in London and enlist the help of the famous detective to find out who is kidnapping garden gnomes. The adventure comedy features the voices of Emily Blunt, James McAvoy, Johnny Depp, Maggie Smith, and Chiwetel Ejiofor. Sherlock Gnomes is set for release next year. 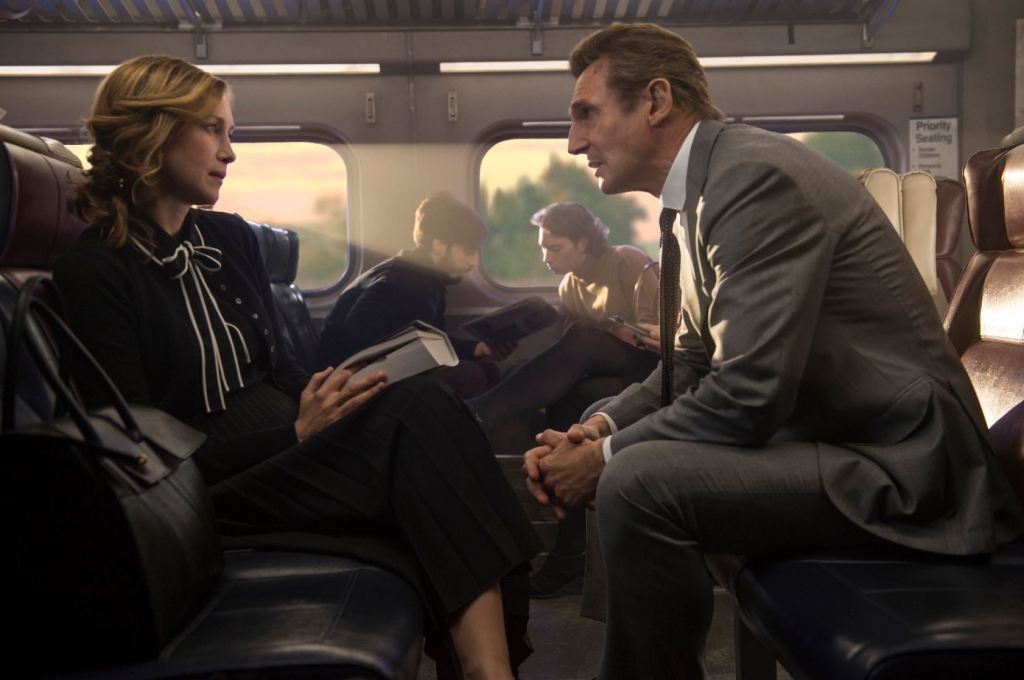 Here is a new look at the upcoming action thriller The Commuter. The film stars Liam Neeson as an insurance salesman who is forced to uncover the identity of a hidden passenger before the train reaches its final stop. Neeson is joined by Vera Farmiga, Patrick Wilson, and Sam Neill. The Commuter arrives in UK cinemas on 19th January 2018.

Kenneth Lonergan’s Manchester By The Sea is rich with emotion and so finely executed that it lingers in the mind long after viewing.

After tragedy strikes, Lee is forced to travel to Manchester By The Sea to look after his nephew. Lee is a reluctant caregiver, as he feels closer to his past in the town…

Kenneth Lonergan exhibits a skilfulness in filmmaking and storytelling with the excellent Manchester By The Sea. The film is a masterclass in portraying grief. In spite of the bleakness of the subject matter, Lonergan’s film never becomes mawkish or melodramatic. Instead, it is taut, and subtle in conveying some harrowing incidents.

Writer-director Lonergan tells the story of a haunted man becoming the reluctant guardian of his nephew. The film is littered with flashbacks, which tells the story of Lee’s previous relationship with his nephew, with his brother, and with other members of his family. The film requires the audience to be patient in waiting for more details; these are revealed slowly and effectively. Lonergan’s eschews dropping these for shock value. Instead, these are careful placed, and more effective as a result.

Characters in Manchester By The Sea are so well drawn. Lee enters as a isolated, monosyllabic character. As more is revealed about his past, the reasons for his behaviour become clear. The story is not what some may expect from the film’s premise. What could have been an odd couple style comedy drama in different hands, is an exceptional drama in this case. Casey Affleck delivers an incredibly potent performance as Lee. Lucas Hedges is convincing as Patrick. Michelle Williams and Kyle Chandler provides good support.

Kenneth Lonergan’s mastery is depicting darkness, but drawing this back every so often with naturalistic humour. Manchester By The Sea is a thoroughly convincing portrait of a broken man.

Manchester By The Sea is being screened at the BFI London Film Festival in October 2016.

Super 8 is the best blockbuster of the year so far. J.J. Abrams homage to producer Steven Spielberg is utterly charming.

Charles enlists the help of his friends, including Joe Lamb, to shoot a short movie. Hoping to enter the film into a competition, Charles seeks production values. Shooting a scene at night, the young teens witness a terrifying train crash. Following this, mysterious incidents take place in the town, as Joe and friends try to investigate what has occurred…

Super 8 is a fantastically well constructed film. Like the best blockbuster movies, Abram’s film effectively combines action-adventure, comedy and science fiction. These elements work well together; Super 8 has the ability to shift between comedy and tension seamlessly.

The film displays some sentimentalism. This is not particularly surprising, given Spielberg’s involvement. Moreover, these moments are well executed and are in keeping with the overall feel of the film. The sentimentalism never really veers into cheese territory.

The sense of mystery works well in Super 8. The contents of the train is not revealed initially, leading the main characters and the viewers to question the army’s involvement as well as the strange occurrences. It is a significant way into the film before more details are revealed, which keeps viewers guessing as to if or how the supernatural comes into play.

The influence of Spielberg’s films from the 1970s and 1980s is made very apparent in Super 8. The mystery over the cause of events is reminiscent of Close Encounters of the Third Kind. The camaraderie of the group of kids harks back to E.T. and the Spielberg-produced The Goonies. The references are visual as well as thematic, with the running in the train crash sequence harking back to an infamous Raiders of the Lost Ark scene. Furthermore, the references to George A. Romero are a nice touch. Abrams pays homage to his influences in the best possible way; overtly and slightly in awe, but blended seamlessly into the action.

The effects used in the film are first rate. Super 8 has a polished overall look, again harking back to Spielberg’s earlier blockbusters. The sound is suitably consuming. Michael Giacchino’s score is apt, although a section sounds very similar to Danny Elfman’s Nightmare Before Christmas theme.

The comedy in the film is effective thanks to Abrams’ script and the very natural interaction of the young teens. Performances are great all round, with Joel Courtney, Elle Fanning and Riley Griffiths standing out in particular. Kyle Chandler, meanwhile, looks every inch the late-1970s dad as Jackson Lamb.

Abrams’ film is highly recommended, and will likely be remembered as one of the year’s best movies. Super 8 is simply a delight.