Plenty in this week’s preview of coming attractions, including the new Darkest Hour trailer, Dunkirk, American Assassin, and more…

Here are the highlights from last night’s world premiere of Dunkirk in London’s Leicester Square. Directed by Christopher Nolan, the film stars Tom Hardy, Kenneth Branagh, Mark Rylance, and Cillian Murphy. Dunkirk will be released in both 70mm and standard presentation on 21st July 2017.

Here is the second trailer for American Assassin. The presence of Michael Keaton just makes everything better. The film is about a CIA black ops recruit under the training of a Cold War veteran. Keaton is joined by Dylan O’Brien, Taylor Kitsch, and Sanaa Lathan. American Assassin hits UK screens on 15th September 2017.

This featurette focuses on Atomic Blonde‘s stunt coordination, and Charlize Theron considerable skill in this department. Theron stars as a lethal assassin sent to deliver a priceless dossier in 1980s Berlin. Also starring James McAvoy and John Goodman, Atomic Blonde is out in UK cinemas on 9th August 2017.

Here is the poster for Maudie. Based on a true story, the film is about an unlikely romance between a folk artist and a reclusive fish peddler. The film stars Sally Hawkins and Ethan Hawke, and is directed by Aisling Walsh. Maudie will be released in UK cinemas on 4th August 2017.

Above is the latest look at Valerian and the City of a Thousand Planets. If nothing else, the film will be a visual feast. Directed by Luc Besson, the film stars Dane DeHaan and Cara Delevingne. Valerian will hit UK screens on 2nd August 2017.

Lots to see in this week’s preview of coming attractions, including the new Detroit trailer, Transformers: The Last Knight, 6 Days, and more…

Here is the Detroit trailer. Kathryn Bigelow’s latest film is about the civil unrest that rocked the city in 1967. The film stars John Boyega, Will Poulter, Anthony Mackie, and Jack Reynor. Detroit will be released in UK cinemas later this year.

Here is the latest Transformers: The Last Knight trailer. The film sees Mark Wahlberg and Josh Duhamel return from the last instalment. They are joined by Anthony Hopkins this time around. From the above trailer, it seems that the world this film is set in is rather different to previous incarnations. Transformers: The Last Knight will hit UK screens on 23rd June 2017.

So far, all the Atomic Blonde promotion seems to be delivering style in spades. The film stars Charlize Theron as an MI6 agent sent to deliver a priceless dossier. Theron is joined by James McAvoy, John Goodman, and Eddie Marsan. Atomic Blonde will be released in UK cinemas on 11th August 2017.

The Mummy is intended as a reboot of the Universal Monsters series of films which were successful in the 1930s. This film is meant to kick off the series, which will also see the return of famed creatures in a shared universe. This new version of The Mummy certainly has star power; Tom Cruise heads up a cast which includes Sofia Boutella, Courtney B. Vance, and Russell Crowe. The Mummy hits UK screens on 9th June 2017.

6 Days is a new action thriller based on true events. The film focuses on the Iranian Embassy siege that took place in London in 1980. The film stars Jamie Bell, Mark Strong, and Abbie Cornish. 6 Days is out at UK cinemas on 4th August 2017.

My Cousin Rachel is an adaption of the Daphne du Maurier novel. The film is about a young man who plots revenge against his mysterious cousin, who he believes murdered his guardian. Starring Rachel Weisz, Sam Claflin, and Holliday Grainger, My Cousin Rachel will be released on UK screens on 9th June 2017.

Here is a clip from upcoming thriller Unlocked. The film is about a CIA agent who must stop a biological attack in London. Noomi Rapace heads up the cast, and is joined by Orlando Bloom, Michael Douglas, Toni Collette, and John Malkovich. Unlocked hits UK cinemas on 5th May 2017.

A plethora of film-related goodness in this week’s preview of coming attractions, including Wonder Woman trailer, Baby Driver, Atomic Blonde and more…

Here is the latest Wonder Woman trailer. The film is something of an origins story for one of the most famous female superheroes. Starring Gal Gadot, Chris Pine and Connie Nielsen, the film is directed by Patty Jenkins. Wonder Woman hits the big screen on 2nd June 2017.

Here is the trailer for Edgar Wright’s Baby Driver. The film is about a young getaway driver who wants to ditch his criminal life. The film stars Ansel Elgort, Lily James, Kevin Spacey and Jamie Foxx. Baby Driver arrives in UK cinemas on 16th August 2017.

The latest poster for Life focuses has a suggestion of Gravity about it. Life is about a group of scientists aboard the International Space Station who discover a new life form. The film stars Jake Gyllenhaal, Rebecca Ferguson, and Ryan Reynolds. Life is out in UK cinemas on 24th March 2017.

Charlize Theron is deadly in this trailer for Atomic Blonde. She plays an MI6 agent tasked with delivering a priceless dossier. She is joined by James McAvoy and John Goodman. Atomic Blonde will hit UK screens on 11th August 2017.

Lady Macbeth is the debut feature film from theatre director William Oldroyd. The film is about a young woman trapped in a loveless marriage to a man twice her age. The film stars Florence Pugh and Cosmo Jarvis. Lady Macbeth will be released in UK cinemas on 28th April 2017.

Rough Night is about a group of former college friends who accidentally kill a male stripper. The film looks like a cross between Very Bad Things and Weekend at Bernie’s. The film stars Scarlett Johansson, Kate McKinnon, and Zoë Kravitz. Rough Night will hit UK screens on 16th June 2017.

Lots of big films in this week’s preview of coming attractions, including an Alien: Covenant clip, Atomic Blonde, Beauty and the Beast, and more…

This Alien: Covenant clip gives viewers an insight into the crew and personalities in Ridley Scott’s latest film. Michael Fassbender returns in the sequel to Prometheus, and is joined by Danny McBride, Katherine Waterston, and James Franco. Alien: Covenant is set for release in May 2017. 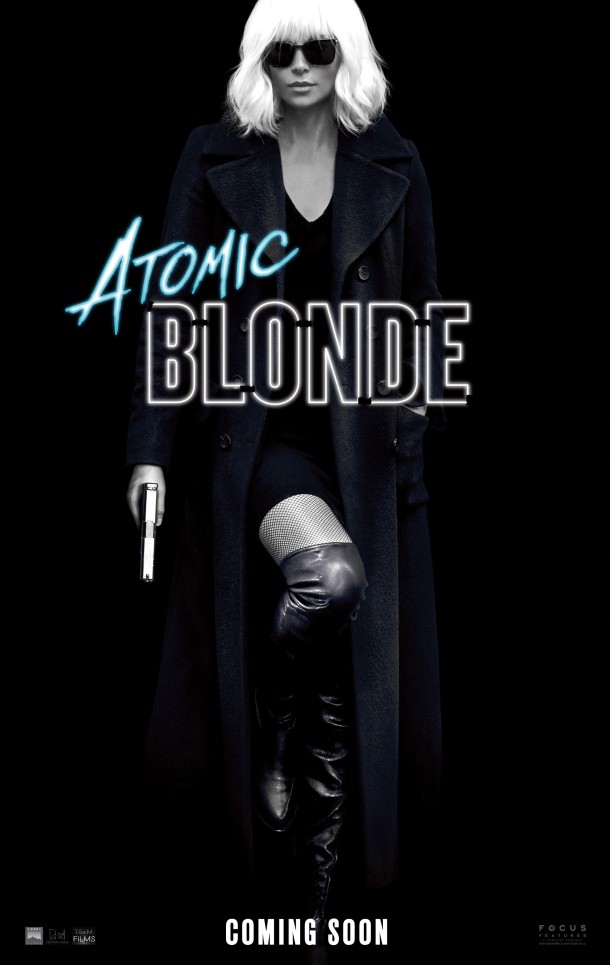 Charlize Theron is striking in this poster for Atomic Blonde. Based on the graphic novel of the same name, the film is about an assassin who is sent to retrieve a priceless dossier. The film also stars James McAvoy and John Goodman. Atomic Blonde hits UK screens on 11th August 2017.

Beauty and the Beast Clip

Emma Watson shows of her singing ability in this clip from the upcoming Beauty and the Beast. From this brief look, it seems as if a lot will be replicated from the original film, but it won’t be a shot-by-shot remake à la 1998’s Psycho. Dan Stevens and Luke Evans join Watson in heading up a enviable cast. Beauty and the Beast is out in UK cinemas on 17th March 2017.

After success with Sherlock Holmes and its sequel, director Guy Ritchie turns his attention to another British fable. King Arthur: Legend of the Sword tells the familiar story of Arthur’s rise to power, albeit in an action-packed way. Starring Charlie Hunnam and Jude Law, King Arthur: Legend of the Sword launches on to UK screens on 12th May 2017.

Ghost in the Shell Poster

The artwork for Ghost in the Shell certainly is striking. Scarlett Johansson stars as Major, a cyber-enhanced human who is tasked with stopping the world’s most dangerous criminals. Based on the Japanese manga of the same name, Ghost in the Shell hits UK screens on 31st March 2017.

Lone Scherfig’s latest film is about a female screenwriter tasked with writing a film to lift spirits during World War 2. Their Finest stars Gemma Arterton, Sam Claflin and Bill Nighy. Based on Lissa Evans’ novel, Their Finest will be released in UK cinemas on 21st April 2017.