This morning saw the launch of the BFI London Film Festival 2019. In its 63rd year, the festival is screening 229 feature films, including 28 world premieres. Here are some highlights from the festival programme…

The opening and closing films for the BFI London Film Festival 2019 had already been announced. The festival opens with the European premiere of Armando Iannucci’s The Personal History of David Copperfield. An adaptation of the Dickens’ classic, the film stars Dev Patel, Tilda Swinton, and Hugh Laurie. Martin Scorsese‘s hotly-anticipated The Irishman closes the festival. There is an embarrassment of riches among the other headline galas, including Rian Johnson’s Knives Out, Marielle Heller’s (Can You Ever Forgive Me?) A Beautiful Day in the Neighbourhood, and Michael Winterbottom’s Greed, starring Steve Coogan and Isla Fisher.

Among the ten features in Official Competition at the London Film Festival 2019 are Haifaa Al-Mansour’s (Wadjda) The Perfect Candidate, about a young doctor who challenges Saudi Arabia’s strict social codes. Thomas Clay’s Fanny Lye Deliver’d stars Maxine Peake and Charles Dance, and is about a woman living with her puritanical husband in 17th century Shropshire. The Documentary Competition features Rubika Shah’s White Riot, about the Rock Against Racism movement, and Lauren Greenfield The Kingmaker, which focuses on Imelda Marcos. The First Feature Competition includes Joe Talbot’s The Last Black Man in San Francisco and Shannon Murphy’s Babyteeth, a drama starring Eliza Scanlon and Ben Mendelsohn.

The eleven thematic programme strands are back once more at the London Film Festival 2019. The Love strand includes La Belle Époque, Nicolas Bedos’ drama about an illustrator who uses technology to replay the past, and Ga-young Jeong’s Heart. The Debate strand is particularly strong this year with Citizen K (Alex Gibney‘s documentary on Mikhail Khodorkovsky), Chinonye Chukwu’s Sundance winner Clemency, Terrence Malick’s A Hidden Life, and Scott Z Burns’ The Report, starring Adam Driver. Comedies in the Laugh strand includes Billie Piper’s directorial debut Rare Beasts, whilst Wash Westmoreland’s Earthquake Bird in the Thrill strand stars Alicia Vikander in an 1980s Tokyo-set thriller. Cannes winner The Invisible Life of Eurídice Gusmão is among the films in the Journey category.

The Dare strand features animated coming-of-age tale I Lost My Body and Václav Marhoul’s The Painted Bird, about a Jewish boy on a journey home during wartime. The Cult strand includes Veronika Franz and Severin Fiala’s The Lodge and Lorcan Finnegan’s Vivarium, with Jesse Eisenberg and Imogen Poots. Also in this category is Richard Stanley’s Color Out of Space, a HP Lovecraft adaptation starring Nicolas Cage and Joely Richardson. The Experimenta strand includes Brad Butler and Noorafshan Mizra’s Ruptures, whilst Create includes Midge Costin’s documentary Making Waves: The Art of Cinematic Sound. Two highlights of the Family strand are Edmunds Jansons’ Jacob, Mimmi and the Talking Dogs and Lorenzo Mattotti’s The Bears’ Famous Invasion. Finally, classics that are showing as part of the Treasures programme include David Lynch’s The Elephant Man and Roger Corman’s The Masque of the Red Death, starring Vincent Price.

The BFI London Film Festival 2019 runs from 2nd-13th October. The full programme can be viewed here.

Lots to see in this week’s preview of coming attractions, including the brand new The Commuter trailer, Jumanji: Welcome to the Jungle, Tomb Raider, and more…

Here is the brand new The Commuter trailer. The action thriller is about a regular commuter who is forced to find a hidden passenger on his train. The film sees director Jaume Collet-Serra reunite with Liam Neeson following Non-Stop and Unknown. Also starring Vera Farmiga, Patrick Wilson, and Sam Neill, The Commuter launches onto UK screens on 19th January 2018.

Jumanji: Welcome to the Jungle Trailer

This is the trailer for the new Tomb Raider film, a reboot of the game-set series which starred Angelina Jolie in the early 2000s. Alicia Vikander plays Lara Croft, and the film focuses on the character at the beginning of her career. Also starring Dominic West and Walton Goggins, Tomb Raider is scheduled for release in March 2018.

Above is a clip from The Glass Castle. The film is based on the memoirs of Jeannette Walls, focussing on her relationship with her unconventional father. Starring Brie Larson and Woody Harrelson, The Glass Castle is out in cinemas on 6th October 2017.

This looks like a lot of fun. Better Watch Out is a Christmas time-set horror comedy about a babysitter who must defend her tween charges from an intruder. The film looks like it has all the ingredients of an entertaining movie, from the trailer above at least. Starring Levi Miller and Olivia DeJonge, Better Watch Out hits UK screens on 8th December 2017. 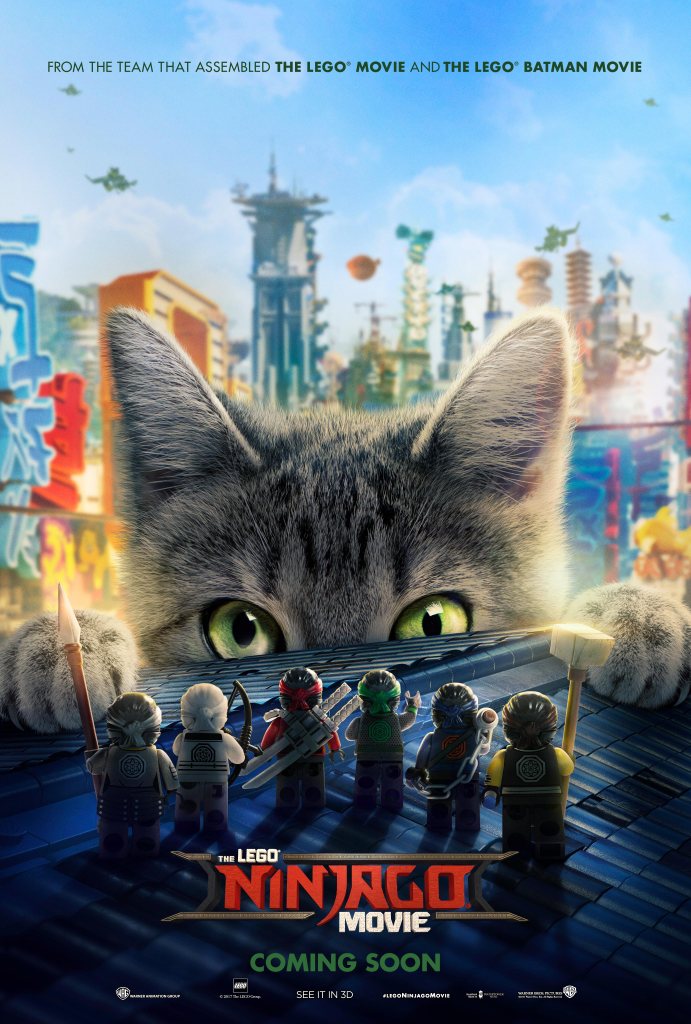 Plenty in this week’s preview of coming attractions, including The Accountant trailer, The Woods, and more…

Here is the new The Accountant trailer. The film stars Ben Affleck as a maths savant who works as a freelance accountant for dangerous criminal organisation. With his latest client, accounting clerk (Anna Kendrick) notices a major discrepancy. The Accountant is set for release on 4th November 2016.

The first-look trailer for The Woods smartly eschews revealing too much. The film has been receiving critical acclaim thus far. It will be interesting to see what You’re Next and The Guest director Adam Wingard has in store for horror fans. The Woods will be released in UK cinemas on 16th September 2016.

Alice Through The Looking Glass Clip

Guy Ritchie’s film reboot of 1960s television series The Man From U.N.C.L.E. is both stylish and entertaining. The film should satisfy those looking for some cinematic escapism.

In the midst of the early 1960s Cold War, CIA agent Napoleon Solo and KGM operative Illyan Kuryakinare tasked to work together on a mission. The pair must stop a criminal organisation from proliferating nuclear weapons…

The Man From U.N.C.L.E. ticks the boxes in terms of a good spy action movie. Guy Ritchie reboots the television show keeping the 1960s setting whilst updating aspects to give the film a modern resonance. The film begins with a set up that functions well to introduce the main characters, as well as the period setting. Moreover, the action which precedes the main plot gives viewers a good taste of what is to come.

There is enough intrigue in The Man From U.N.C.L.E. to keep the audience engaged throughout. There is a small lull after the opening gambit to allow for exposition, but pacing picks up following this. Action sequences are executed with vim, and are well placed throughout the film. The use of humour works well; The Man From U.N.C.L.E. may have come across as po-faced without this.

The relationship between the two previously opposing agents is a theme that develops throughout the film. The Man From U.N.C.L.E.‘s third main character is a young female mechanic tasked with helping the agents to infiltrate the organisation. From the outset, it is clear that Alicia Vikander’s Gaby is more than just a pretty face, putting her in contrast to some of the minor female characters filmed in a horribly dated voyeuristic fashion. The relationship between the trio however works very well.

Styling in the film is wonderful, with beautiful depictions of the 1960s. Costumes are fantastic, as is hair and make up. The whole film oozes this era, with the split screen and use of titles leaving viewers in no mistake of when The Man From U.N.C.L.E. is set. The film harks back to this era without being a parody.

The Man From U.N.C.L.E. is successful thanks to its tone and execution. Whilst it does not reinvent the wheel as an espionage-action thriller, the film is very enjoyable.

A myriad of trailers this week, including Far From The Madding Crowd, Cinderella, Aloha, and more…

Far From The Madding Crowd

Far From The Madding Crowd was one of the few books I remember reading at high school. How the names Bathsheba Everdene and Gabriel Oak take me back. This adaptation of Thomas Hardy’s novel comes with good pedigree; it is directed by Thomas Vinterberg and stars Carey Mulligan, Matthias Schoenaerts, and Michael Sheen. Far From The Madding Crowd is released in UK cinemas on 1st May 2015.

Cameron Crowe’s latest Aloha features a stellar cast, including Bradley Cooper, Emma Stone, Bill Murray, and Rachel McAdams. Bradley Cooper stars as a military contractor who is given the opportunity to return to the site of his greatest triumphs in Hawaii. Aloha is scheduled for release in September 2015.

From the above trailer, it looks as if Cate Blanchett will really shine in Cinderella. As well as, of course, that magnificent-looking slipper. Kenneth Branagh’s update of the classic fairy tale, which premiered at the Berlin Film Festival, hits UK screens on 27th March 2015.

The Age of Adeline

The premise of The Age of Adeline hinges on an interesting aspect; its protagonist stops ageing at 29 years old. If only that could happen in real life, although granted, it would be a bit odd. Starring Blake Lively and Harrison Ford, The Age of Adeline is released on 8th May 2015.

Xavier Dolan’s latest offering is receiving a lot of critical praise. Mommy stars Anne Dorval as a widowed mother tasked with the full-time custody of her son, who has ADHD. Mommy is released in UK cinemas on 20th March 2015.

Here is the first trailer for Trainwreck. Directed by Judd Apatow and written by and starring Amy Schumer, Trainwreck is about a young woman who doesn’t think monogamy is possible. The comedy will be released on UK screens on 28th August 2015.

Here is the trailer for Guy Ritchie’s update on 1960s television show The Man From U.N.C.L.E.. Set against a Cold War backdrop, the film focuses on a CIA agent forced to team up with a KGB operative. Starring Henry Cavill, Armie Hammer and Alicia Vikander, The Man From U.N.C.L.E. is set for release on 14th August 2015.

Director James Kent’s Testament of Youth is a competent historical drama that expresses the horrors of World War I, albeit in a poetic fashion.

Vera Brittain is determined to go to Oxford along with her brother and his friends, even though her father is against it. Vera’s plans are thrown into chaos, however, with the outbreak of the First World War…

Based on Vera Brittain’s memoirs, Testament of Youth is a solid account of the First World War on the educated upper middle classes. Seen through the prism of Vera and her loved ones, the devastation of this conflict is laid bare by director Kent. The film depicts the impact the war had not only on those who saw fighting, but on their loved ones and families. Testament of Youth really hones in on the effect of losing loved ones.

As a protagonist, Vera is wilful and determined, but not necessarily immediately likeable. As the film progresses, however, the audience will feel more empathy for her. The narrative is aptly woven, with sufficient character development for all the main players. Characters in Testament of Youth are certainly believable.

The film makes the most of the landscape. This scenes are beautifully shot, and feed into the poetry that is intwined in the picture. The preoccupation with poetry gives Testament of Youth a romantic feel which sits in contrast with the brutality of war. The film plays on this contrast, creating an abrasion between the violence of the frontline and  the pleasantry of the youngsters’ upbringings.

Alicia Vikander delivers a mostly understated but effective performance as Vera. Elsewhere, Emily Watson and Colin Morgan standout in a decent cast. Testament of Youth is an attentively crafted picture, which gives pause to thought.

Testament of Youth is being screened at the BFI London Film Festival in October 2014.