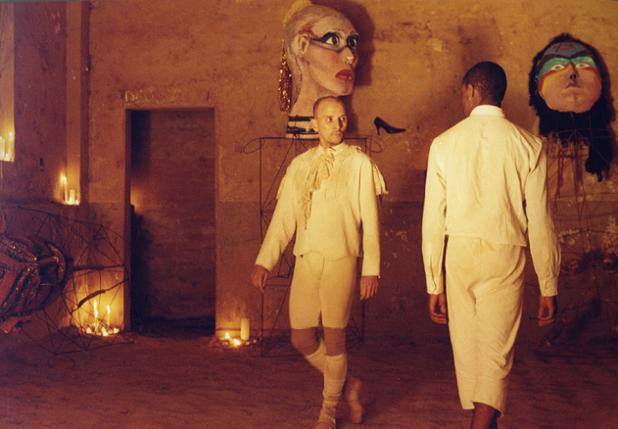 With a story told exclusively through dance, As Cinzas de Deus is an atmospheric experience. The film is a visual experience, and one complimented by its soundtrack.

In the ruins of an abandoned 19th-century city in Brazil, a woman returns to a world of memory. In this location, trapped souls are reliving memories from their past. Searching for answers, she must penetrate the dream-like reality…

Directed by Andre Semenza, As Cinzas de Deus is the first contemporary dance feature film. Produced in 2003, the film is choreographed by Fernanda Lippi. Inspired by Ovid’s Metamorphosis, As Cinzas de Deus functions as a poem, true to its inspiration, rather than a traditional narrative film.

Fernanda Lippi’s choreography is bold throughout the film. In As Cinzas de Deus, the dancers convey everything through their bodies. A combination of solo pieces and group or duo sequences, the film expresses emotion more than storytelling through its choreography. Movement shifts from the careful and slight to rapid and striking. With this altering state, As Cinzas de Deus keeps viewers engaged.

The film moves to a quickened dance sequence within the first five minutes of its duration. This is a good move; Lippi offers the audience a flavour of what is to come. Andre Semenza’s direction is welcomingly rudimental; the film wisely leaves its focus on the movement of the dancers. Nevertheless, there is some good composition in As Cinzas de Deus.

The film is scored with different styles of music, with some pieces reappearing more than once. The soundtrack shifts in tempo and style, and does much to set the tone of the film. As Cinzas de Deus is set amongst the ruins of abandoned buildings. Again, this works well to build atmosphere in the film. All the dancers offer good performances, with Tuca Pinheiro and Ricardo de Paula standing out in particular.

With a dramatic conclusion, As Cinzas de Deus illustrates the physicality of contemporary dance performance. The film is an often mesmerising watch.

As Cinzas de Deus was screened at Trinity Laban Conservatoire of Music and Dance in October 2014. The film is available on DVD.