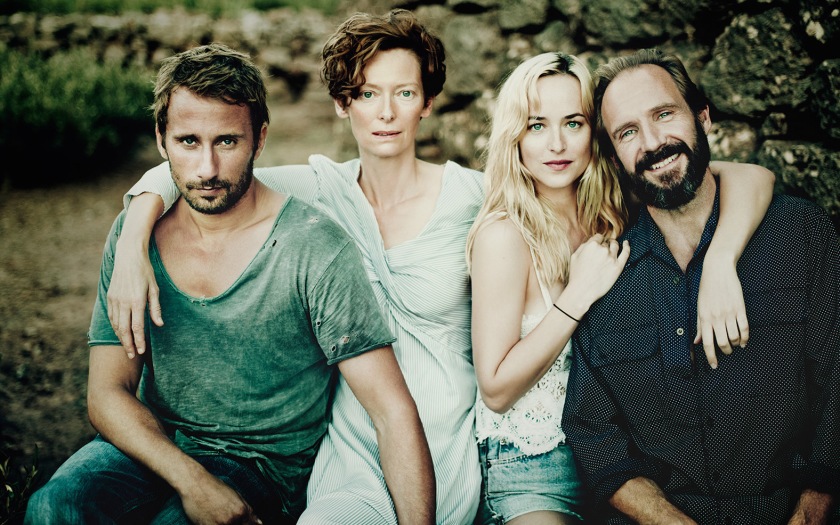 Ralph Fiennes steals the show in Luca Guadagnino’s intriguing A Bigger Splash. The film amuses whilst keeping viewers on their toes.

Rockstar Marianne is hiding out in Italy with her filmmaker boyfriend, trying to rest her voice. The couple’s quiet vacation is disrupted by the unexpected arrival of an old friend and his daughter…

A Bigger Splash is beautifully shot, well scripted with a wholly fitting soundtrack. The narrative works well to pull viewers in. The relationship dynamics become clearer as film progresses, but Harry and the initial set up are enough to initially reel the audience in. The background to the characters’ relationships is revealed through well scripted exposition and a handful of brief flashbacks. These are inserted at thoughtful intervals, with the director crafting the film to keep viewers engaged.

The initial set up of A Bigger Splash leaves plenty of room of movement. It is not clear the direction the film will take; the first third offers a number of possible avenues. The eventual progression is in keeping with the tone and style of the film.

There are some great shots in A Bigger Splash, particularly the dancing sequence. The colours seem almost exaggerated to exemplify hues. The setting is beautiful, yet reveals a quiet claustrophobia which is perfect for the climax of the film.

Casting in A Bigger Splash is excellent. From the moment he enters the scene, Ralph Fiennes is larger than life in a way that is believable and charismatic. Tilda Swinton is entirely believable as the rock star on throat rest. Dakota Johnson looks the part, in a role that does not stretch.

The pacing and subject matter of A Bigger Splash may not equal mass appeal, but it is a worthwhile film for those willing to take a punt.

A Bigger Splash is being screened at the London Film Festival in October 2015.